Gig at the Beacon, Whitehaven

First time out in public for over two years, five of us arrived at the Beacon Museum, on Whitehaven's harbourside, all togged out in our Georgian costumes. (Sadly, Jane, our great bass player, was out of commission with a bad cold.) The event was the opening night of a new touring exhibition from the National Gallery, featuring a painting from 1740  by  Jean-Siméon Chardin called The House of Cards.

We played a variety of music which would have been available in Chardin's day, including a selection form Playford's collections, a number of pieces by Handel, Loeillet, Banister and others, on recorders, flutes and guitar. We were just there to provide background music, but the attendees seemed to enjoy it and we received many favourable comments.

It was lovely to be out performing again, and we are now ready for anything you may ask of us! (Within reason ....)

You can see lots more photos of the event here. 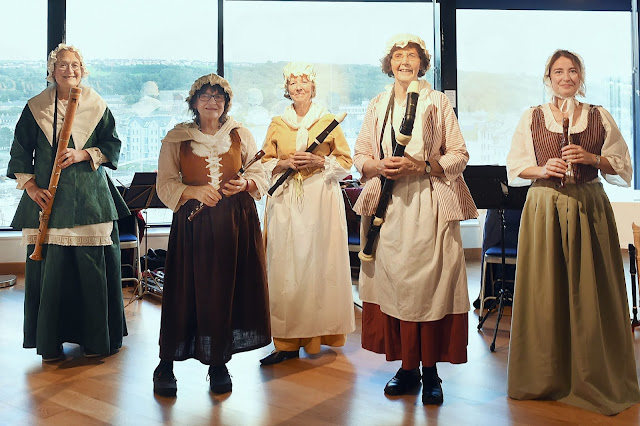 Music is coming back to life at last!

During the various lockdowns, musicians have had to survive without playing together, but things are gradually coming back to normal, and Piping Hot have managed several practices. It's so lovely to be making music again, even if we're all a little rusty! 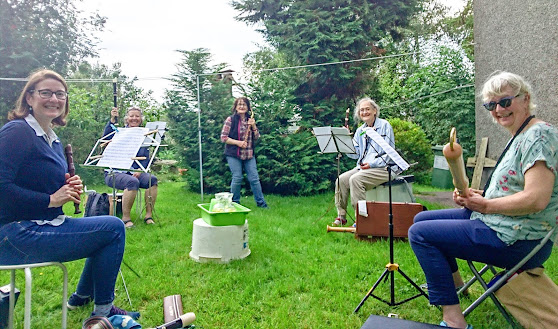 Here are some of us practising in the garden last summer, when a bit of socially distanced playing was  first allowed.

And here are some of us more recently in the village hall.

Our fans must think we've stopped playing, as we've not uploaded anything here for ages. My apologies! We're still playing away, though with a slightly altered personnel.

Our dearly loved Bridget sadly passed away in summer 2018, and we're still feeling her loss keenly. But she'd have wanted us to go on playing, so here we are.

We have a couple of new members, but no photos of them yet, so watch this space!

In the meantime I've added a link to our Soundcloud page where you can hear a few of the tracks we've recorded over the years.
Posted by ally mcgurk at 22:41 No comments:


We had a last-minute booking recently, to help a school which was doing a whole week of music-related activities.   It seemed like exactly the right thing for us to do, to help promote live music.

Only four out of the six of us were able to be involved, so arranging some of the music for a quartet was required.   We knew that this was going to be a half-hour-long gig, and that the audience would include children from age 4 or 5 up to 11 years old, so it was going to have to be a varied programme full of short pieces, to allow for possible limited attention span in the younger members of the audience.

We played a sort of 'potted history' of music, starting with a 13th century Ductia, followed by 14th century Trotto, and so on, with each century represented by one or two piece of music.  Here's the programme:

The children in our audience were wonderful!    They were very well-behaved, sat still and listened with all their ears, and joined in where we needed them.   The piece by Rathgeber has places in the music where one has to shout ''Ha Ha'', or whistle twice, or stamp feet twice, and they obliged very enthusiastically, being directed as to which was required, and when, by Liz, who held up signs for them.

I think it's fair to say that we would welcome the chance to do this sort of thing again, for other schools, not necessarily as part of a special week of music.   Please contact Ally at ally@pipinghot.org.uk  if you would like us to visit your school!
Posted by ally mcgurk at 10:26 No comments:

These will be posted on our diary page as well, but please look out for us at: 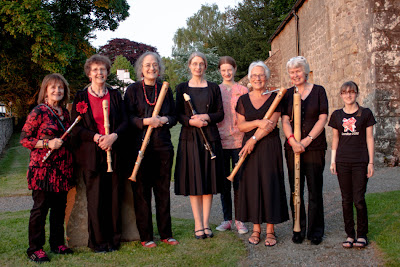 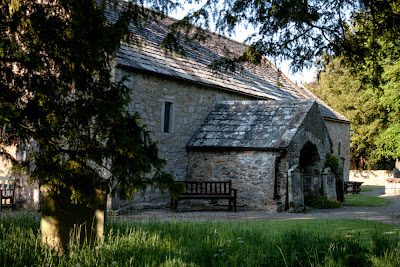 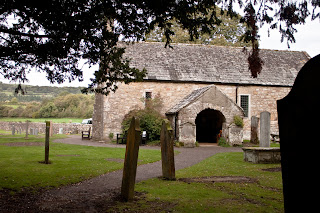